I travelled from Tokyo (Shinigawa) to Kyoto by Shinkansen. The Tokaido Shinkansen towards Shin-Osaka. The JR Pass doesn’t include the fastest bullet train ‘Nozomi’, so I took the second fastest called ‘Hikari’. It is 20 minutes longer than the Nozomi, covering the 470km to Kyoto in 2 hours 40 mins. TRIP TIP: Watch out for Mount Fuji along your journey. Although I did this train journey a number of times I still never managed to catch a glimpse of the great shield volcano. They don’t announce it, but you should be able to see it around the station called ‘Shin-Fuji’.

So I arrived at Kyoto mid afternoon. It’s the old capital of Japan and probably one of the most traditional places for tourists to visit. In fact Kyoto is probably my favourite place in Japan. So below is the street towards Kiyomizu-dera Buddhist temple in Eastern Kyoto. There are actually thousands of temples in Kyoto to visit, sadly I couldn’t visit them all. The street towards the temple was uphill and along the way you’d see tourists and natives, many wearing the traditional clothing of Japan. Kyoto is probably also the best place to get souvenirs. I don’t actually ever recall seeing a souvenir shop in Tokyo, and if I did the items didn’t really scream this was from Japan. 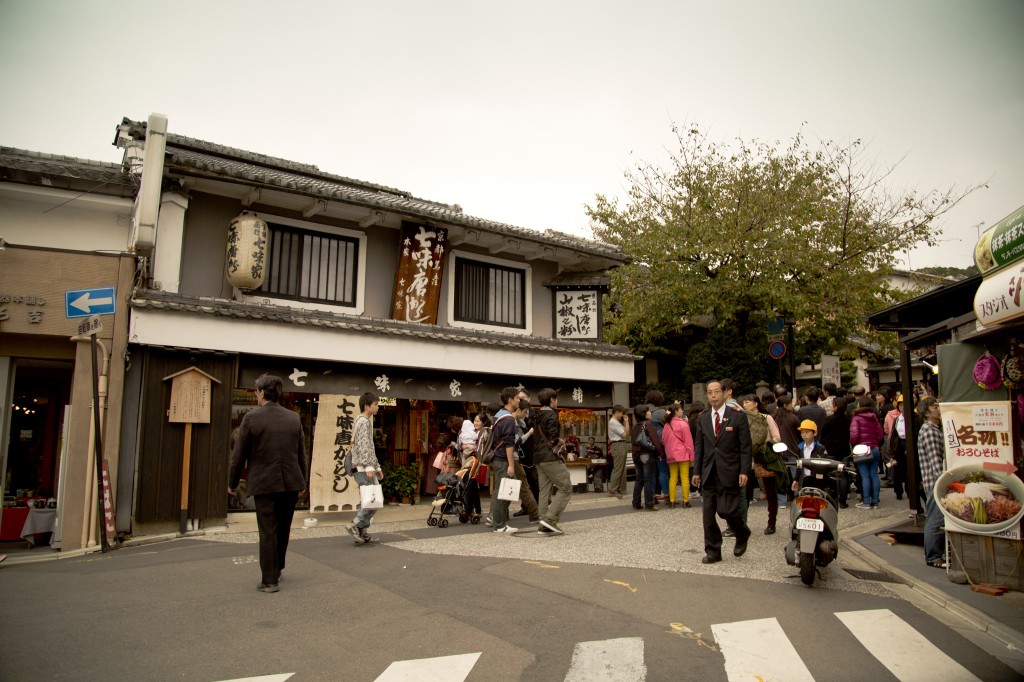 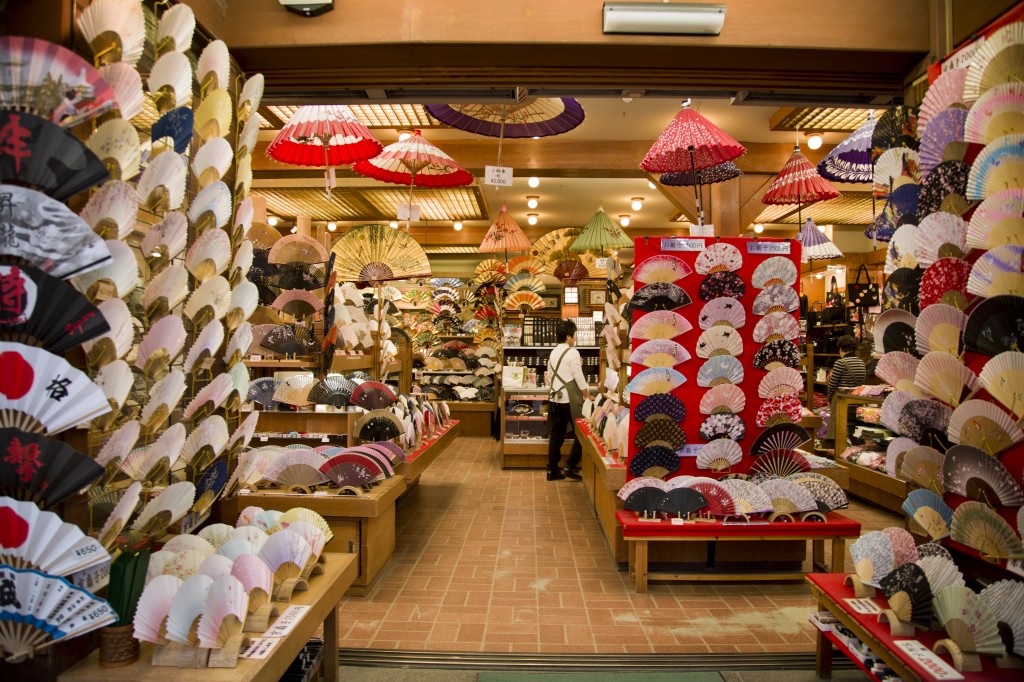 So I reached the temple gate. This trip was for my 21st Birthday and as I do every year, I buy myself a birthday gift. This time round it was my trusty camera, the 5D Mark III. Japan was really a test run to see what this baby could really do.  So a lot of my photographs are just pure experiments. One thing I started to enjoy doing was using the environment as a natural framing device. Exhibit A and B below. 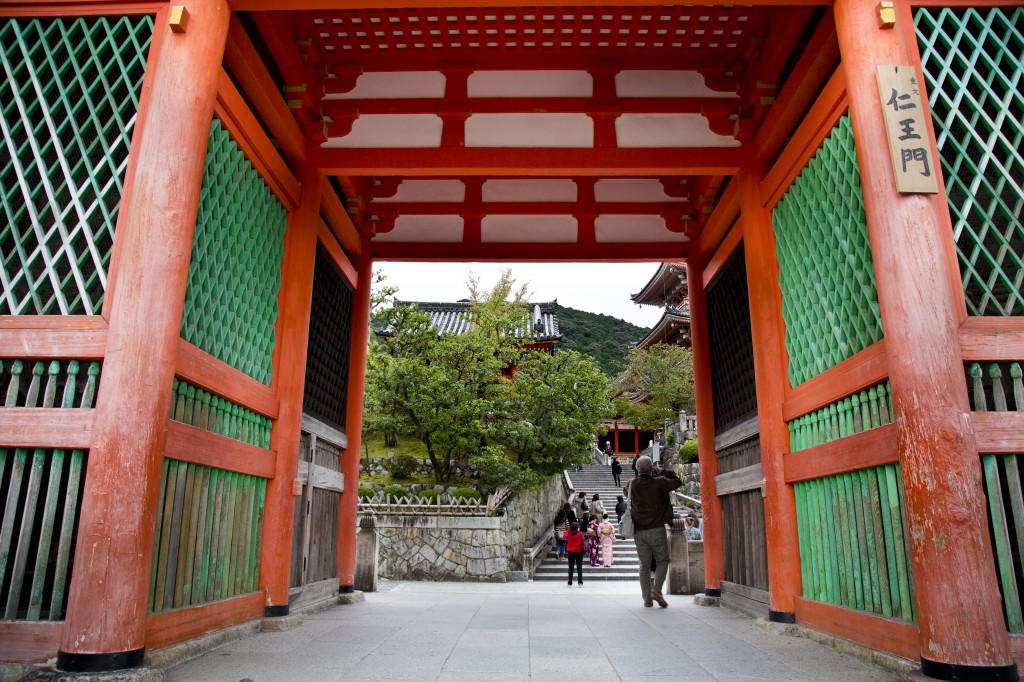 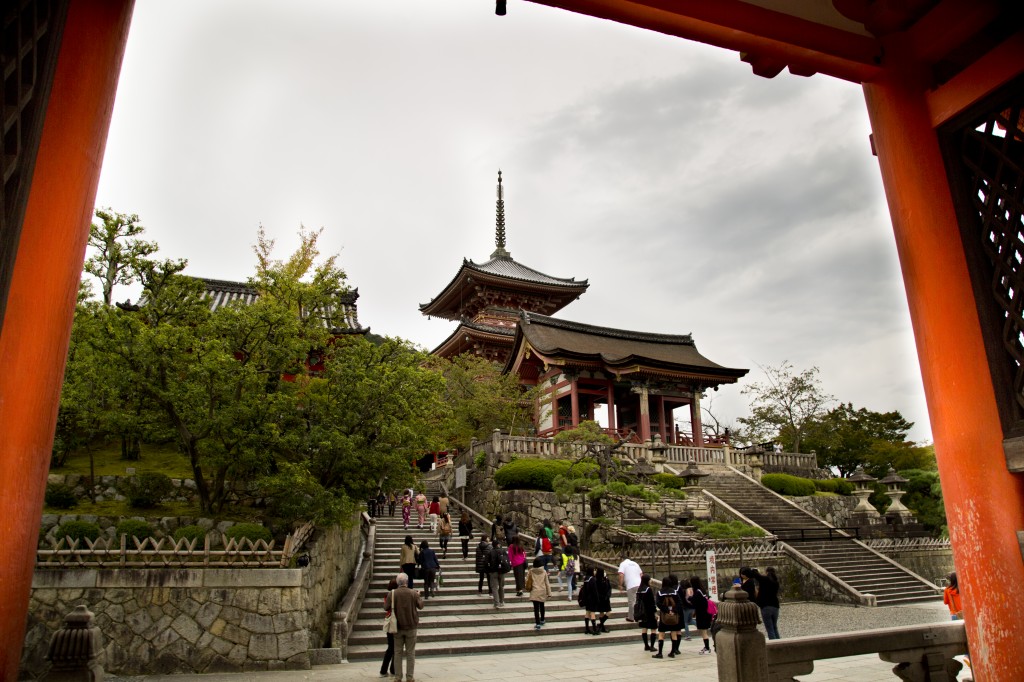 The place was crawling with people and I wanted to try and capture that. Using a slower shutter speed and steady hands (no tripod), I wanted to  get the busy movement of people just flowing by in their waves. 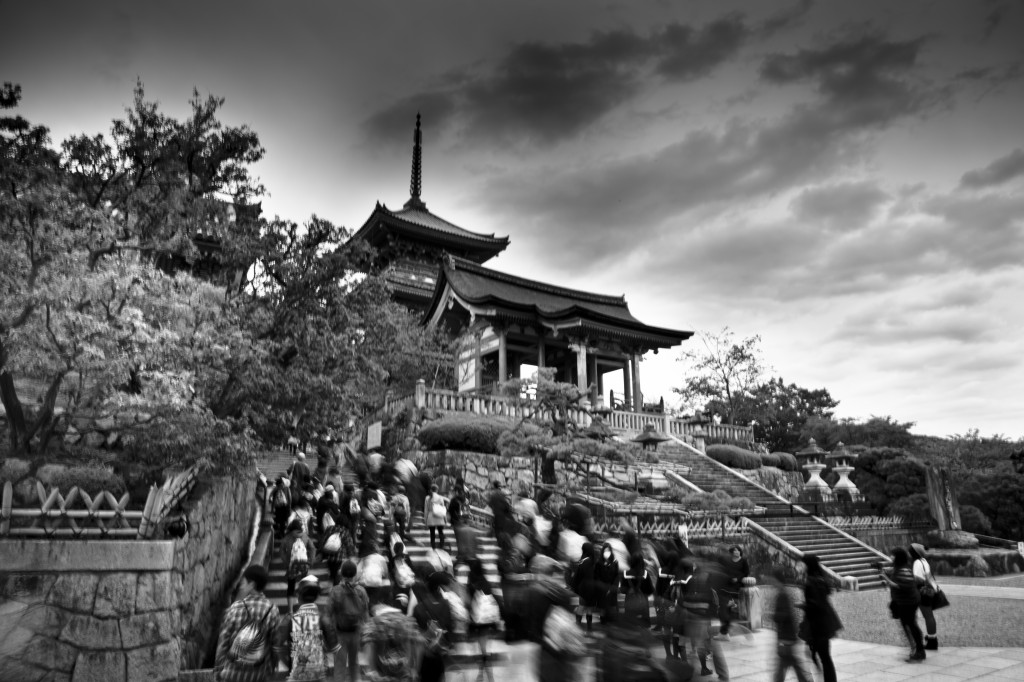 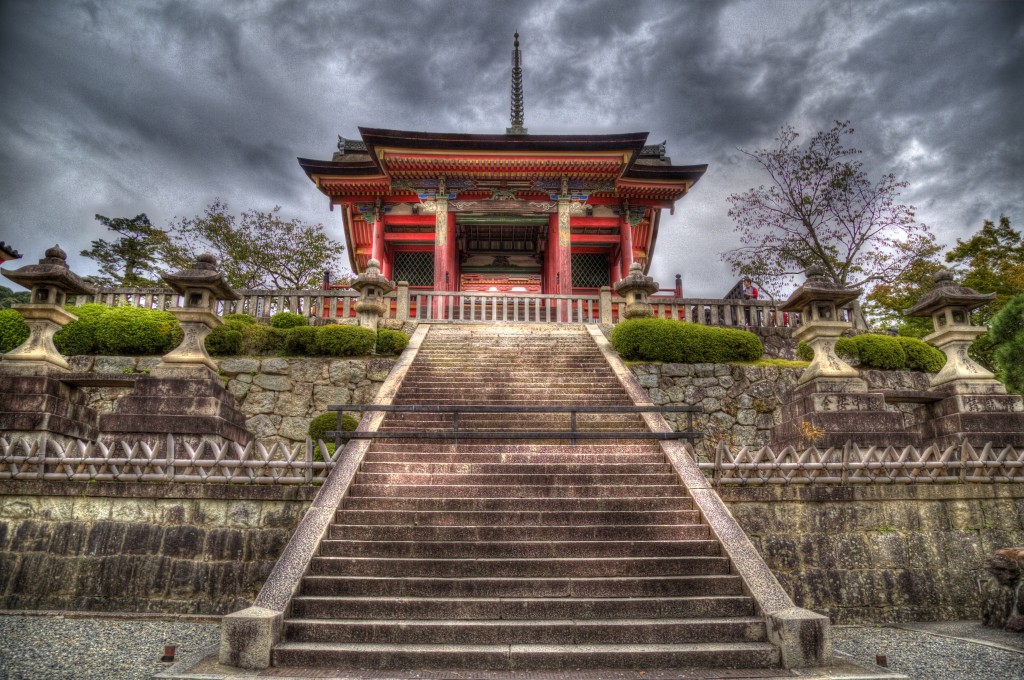 It’s rare to get the scene just to yourself, there’s always someone photo bombing. Luckily I managed to do this HDR, it’s actually one of my first HDR’s I’ve ever done. Came out decent, room for improvement. 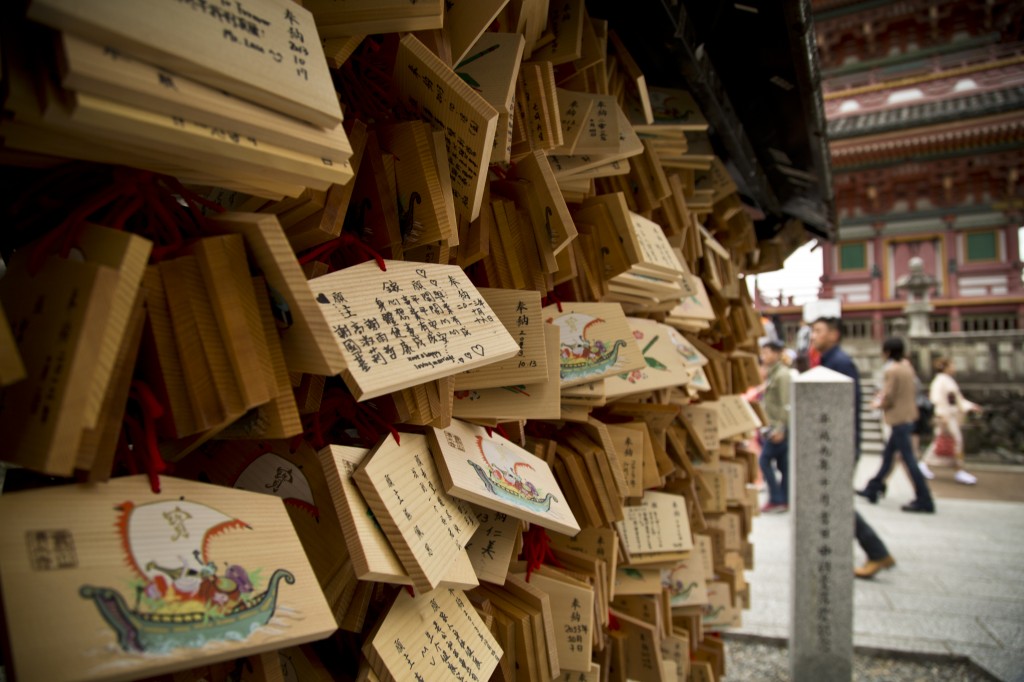 So you’ve probably noticed this post has a lot more photos than the previous. Mainly because I took about 2000 photographs each day and they all documented something about my trip. Unfortunately I can’t show them all, but I really wanted to share with you some of the things I saw and found out. ‘Ema’ are small wooden plaques commonly used in Shinto worship… although this was a Buddhist temple (this didn’t occur to me at the time). Here you write your wishes, dreams, hopes for success in health or exams etc with hopes that Kami will grant them and watch over you. I wrote one to say thank you for bringing me here on my birthday, to the place I’ve dreamt of all my life. 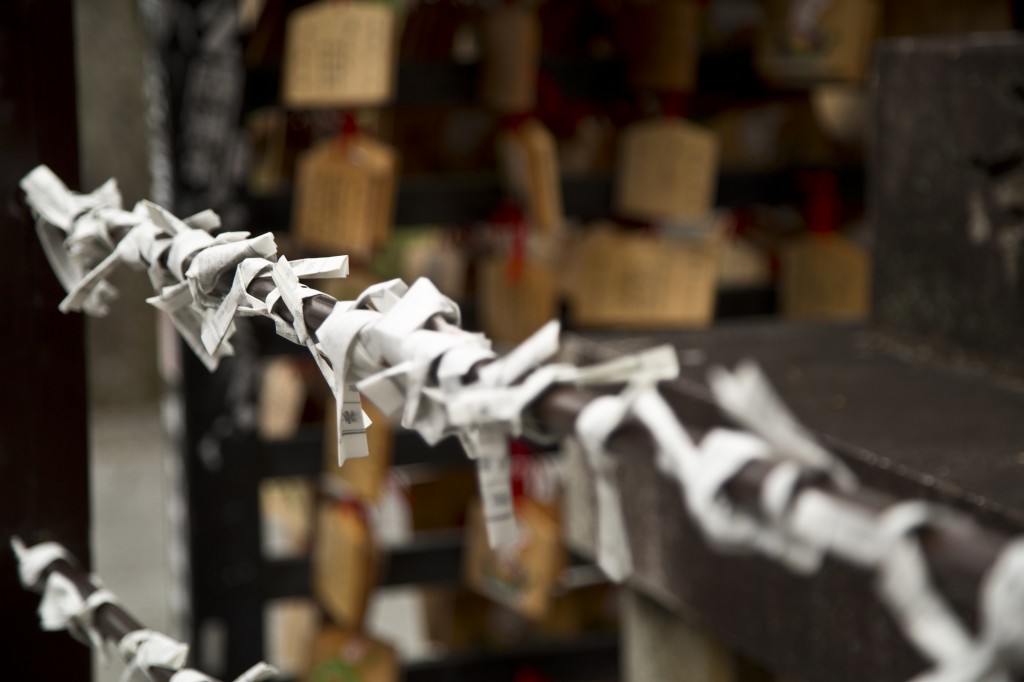 They also had pieces of paper as alternative to wooden plaques. I’d never seen or heard about this before. 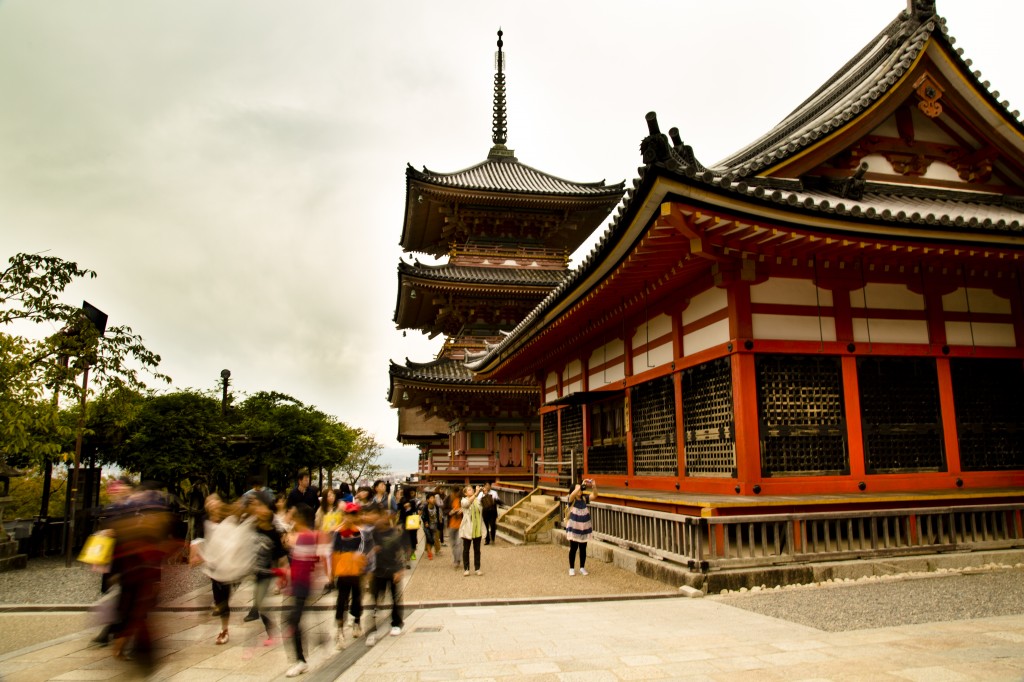 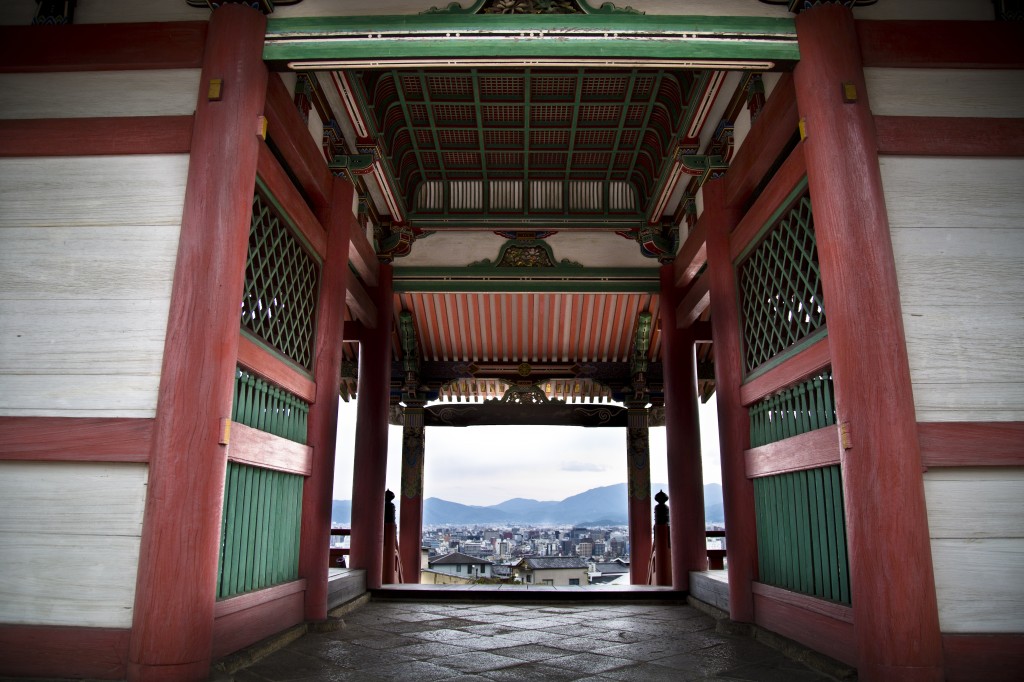 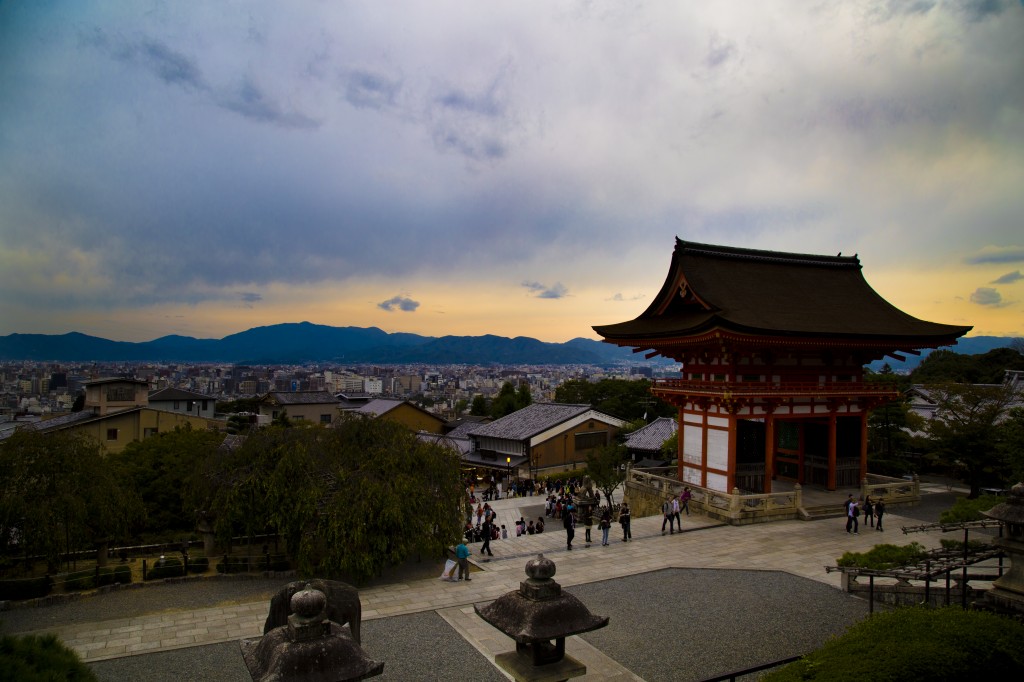 The Sun started to set in Kyoto, and the Temple visiting hours were coming to end. TRIP TIP: Make sure you check out each temples opening and closing hours, they vary for each temple. Having arrived in Kyoto in the afternoon, Kiyomizu dera were one of the later closing temples. 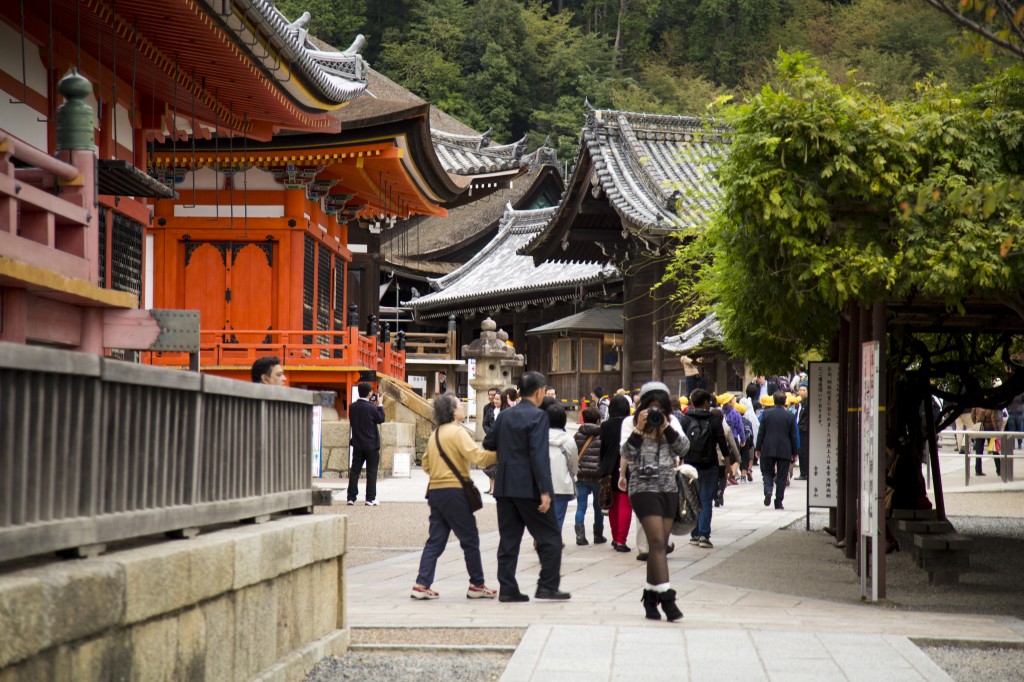 I wanted to show you this photograph (above) because I absolutely love the roofs in Japan.Sadly the only shots I got have family members in. So in the centre is the debut of my little sister (taking after me with a 35mm slr and my canon 500d.) 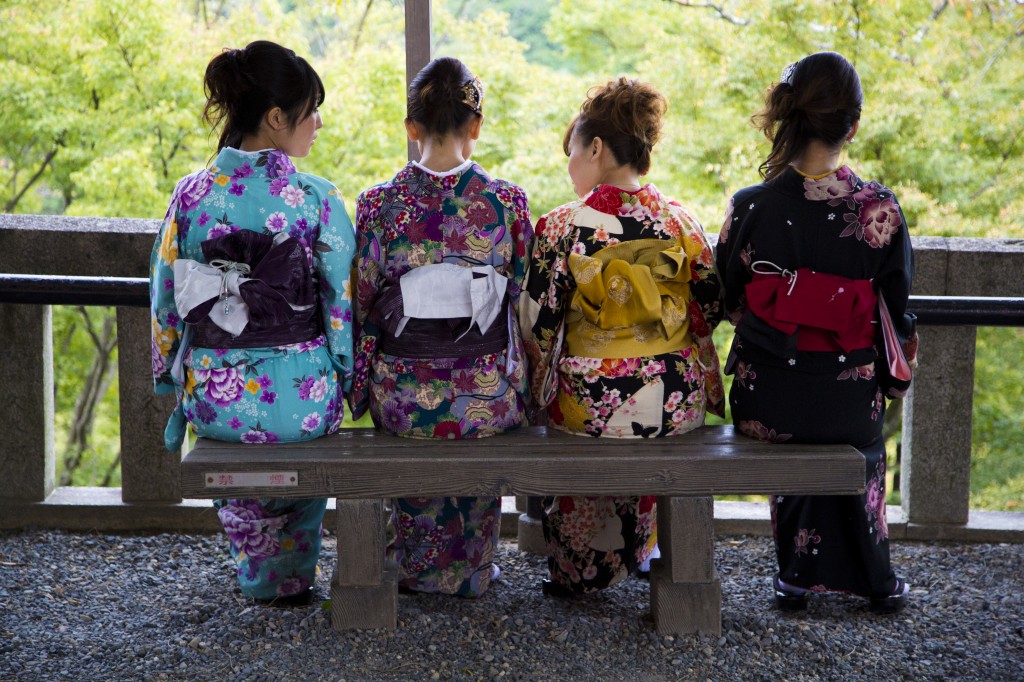 Four Japanese girls sitting down eating their lunch. Their Yukata designs are beautiful. 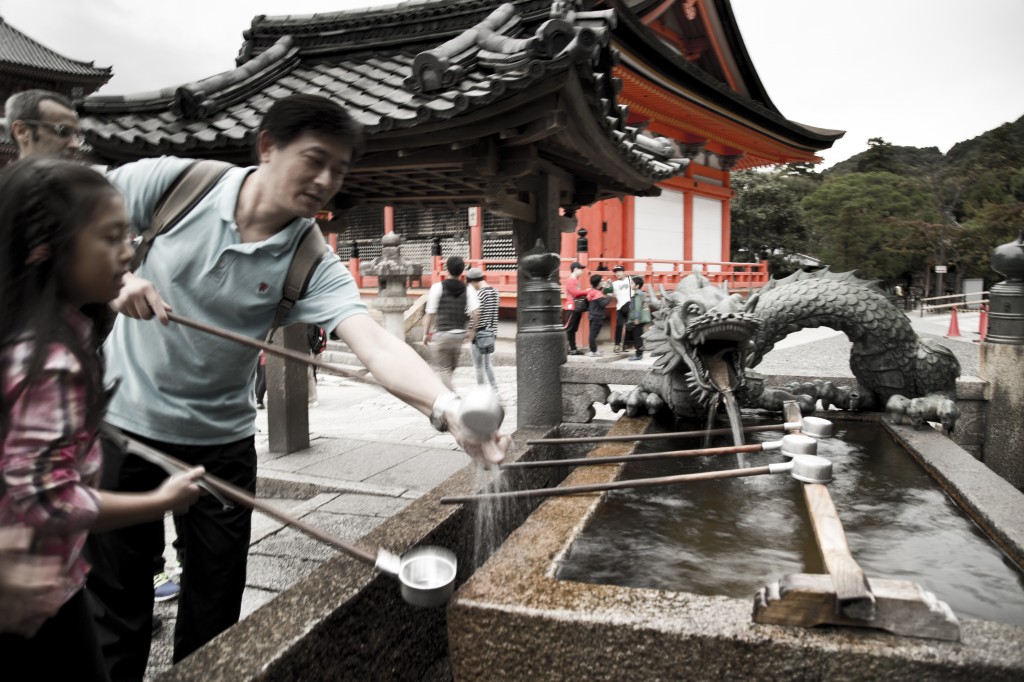 It is Shinto custom to wash your hands in the wells provided on the temple grounds before entering the sacred temple. You may or may not have noticed the style of photography I prefer is a more natural approach. This basically means taking the shot without the person noticing. It allows me to capture the moment just like how I would have seen it when I was standing there. 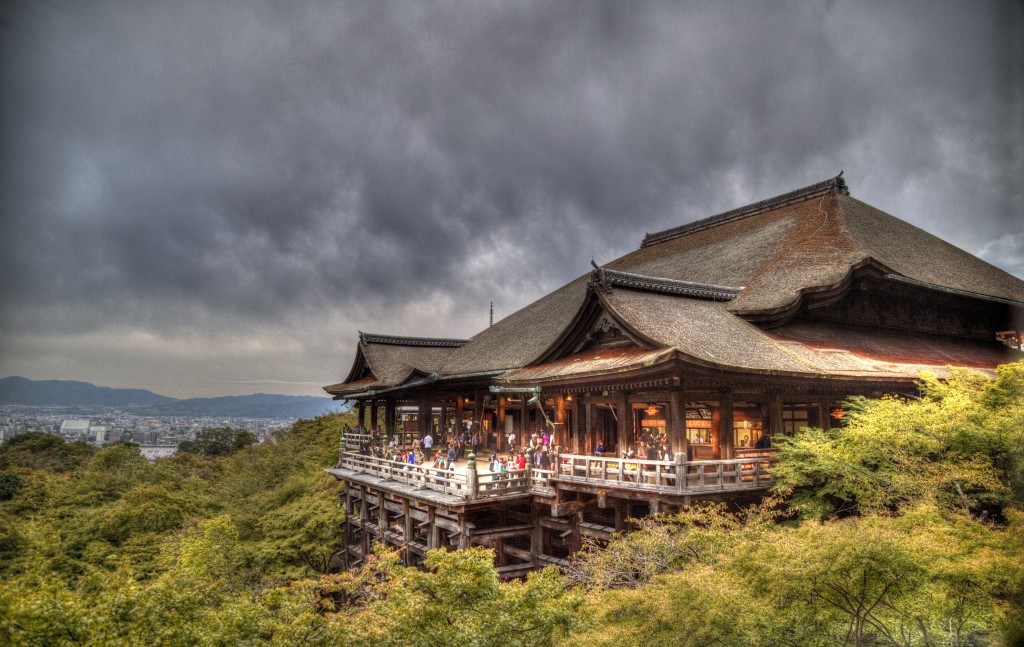 So this Kiyomizu-dera. After visiting it, visitors must follow a one way system down the hill. TRIP TIP: The walk down hill is probably the best place to get a shot of the temple but it is very crowded. There is safety railing you can rest your camera on, but unfortunately no room for a tripod.

LOCAL FACT: In Edo period Japan there was a phrase ‘To jump off the stage of Kiyomizu”, equivalent in English as “to take the plunge”. Here if you jumped off and survived you would get your wish granted. This practice no longer takes place, records show at least 234 people who have taken the plunge. 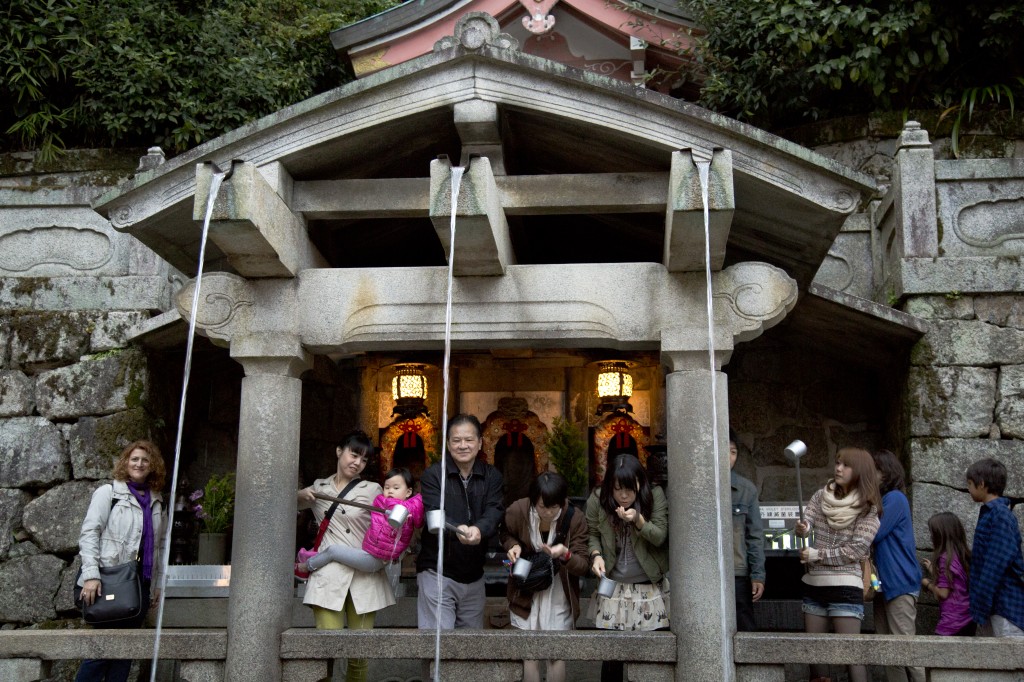 Kiyomizu actually means ‘pure water’. So the temple is the temple of pure water. Underneath the great Buddhist temple is Otowa no taki waterfall. Here you can drink the sacred water which splits into three. Each stream is said to have a different wish granting property; health, longevity and wisdom.  LOCAL FACT: Drinking all three streams are said to be bad luck and considered greedy. 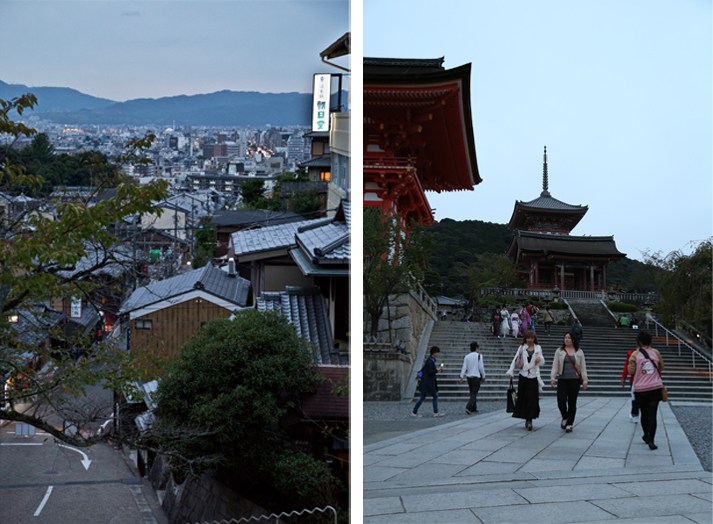 So as night started to fall the remaining visitors left the temple. All the shops we saw during the day had closed as we made our descent. It was truly a spectacular birthday, one which I will never forget. 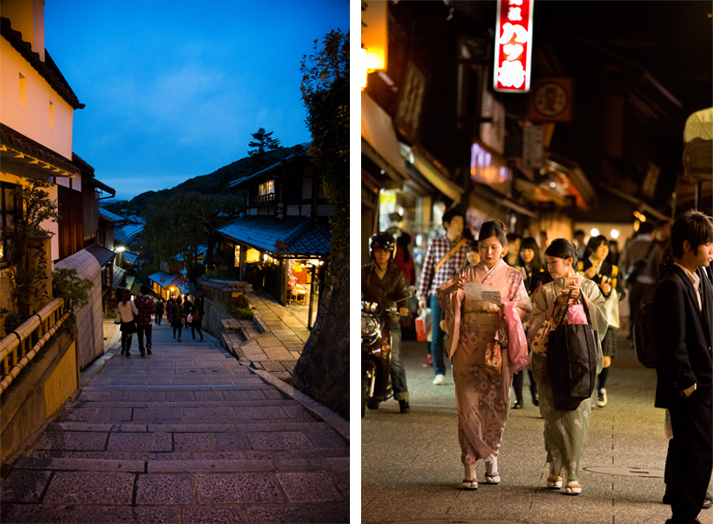